Most of the large spiders in Ohio are actually quite harmless.  They are fast and alert, and will usually retreat or run away if given a chance.  You should consider shooing the spider away with a broom, or capturing it in a container and releasing it well away from your house.

There are two types of spiders that generate the vast majority of panicked emails I receive from Ohioans.  These two are:

Nursery web spiders (aka fishing spiders) are very impressive animals. Large adult females can have leg spans of over three inches (close to the size of the palm of your hand).  The most common species of nursery web spider (family Pisauridae) found around buildings in Ohio is Dolomedes tenebrosus [like many spiders this species has no formal common name].  These spiders are common in wooded areas throughout Ohio.  They can be found in wood piles, garages, basements, and particularly in unfinished cellars.  They may also wander into the house. 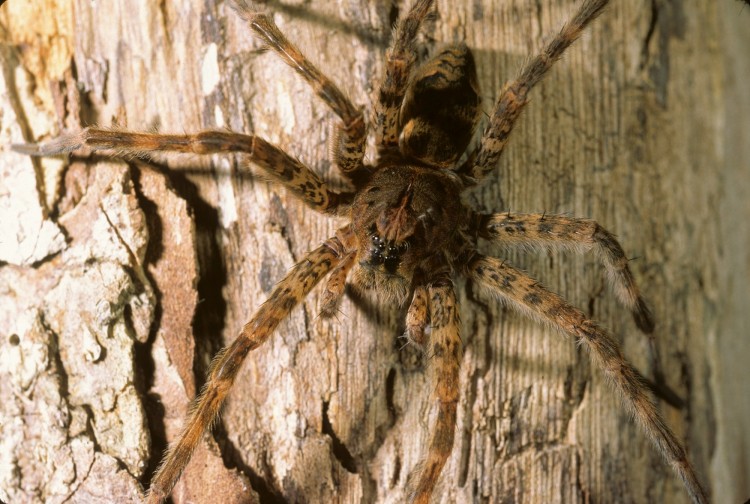 Dolomedes tenebrosus on a tree trunk, note the strong “safety line” of silk attached to her spinnerets at the end of the abdomen

Dolomedes tenebrosus are actually relatively skittish spiders and if given a chance they will flee (they run and hide remarkably quickly).  If you should be silly enough to pick one up with bare hands (I do NOT recommend this!), you might get bitten.  I’m told that the bite is briefly painful, and sore for a few days. The good news is that I’m unaware of any serious medical consequence of such a bite.  Nursery web spiders are famous as good mothers. They carry and protect their egg sac for weeks, then just as the spiderlings are about to emerge, the mother spider spins a special nursery web.  This web is usually built with folded leaves and silk. The egg case is placed inside and then she waits.  When the young spiders (spiderlings) emerge, they hang out in the protected spot until they are ready to disperse. Their mother stays nearby to protect them. 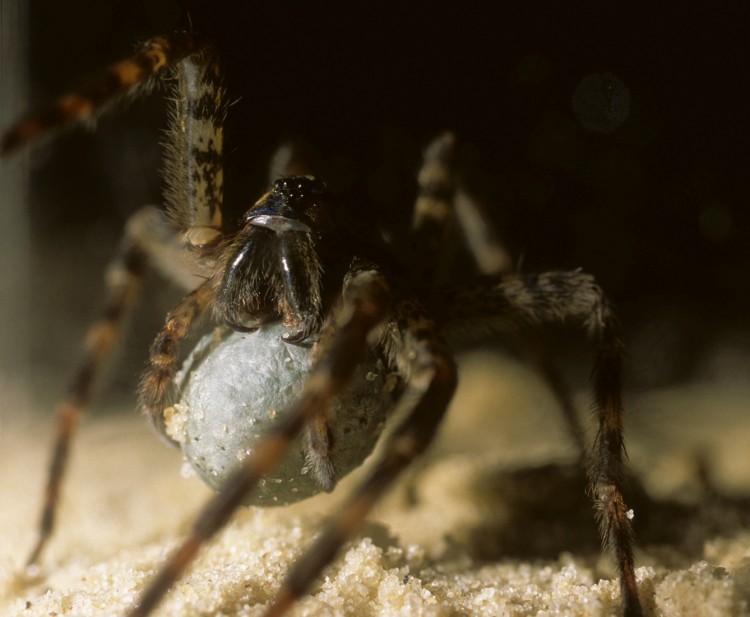 Dolomedes tenebrosus female with her egg case held by her palps 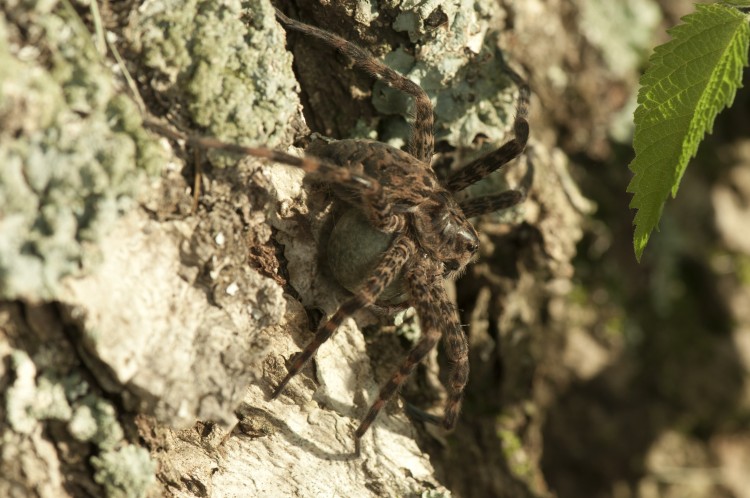 Wolf spiders are among the most common spiders in Ohio.  There are 57 species known from our state.  Some of these are very tiny.  One particularly common and large species is the field wolf spider (Tigrosa helluo, an older scientific name is Hogna hello).  Every year I get many email messages, some with accompanying photos, reporting large brown wolf spiders in houses.  These reports are most frequent in the autumn.  This is the time of year that many Tigrosa hello are seeking a sheltered place to spend the coming winter.  Frequently at this time of year they enter houses.  I know at my house in the country I get dozens of such invaders every fall.  In the autumn of 2013 I kept track, in October we found 2, in November we found 22!, in December only 1.  My indoor cat actually plays with, occasionally catches, and sometimes eats, them. 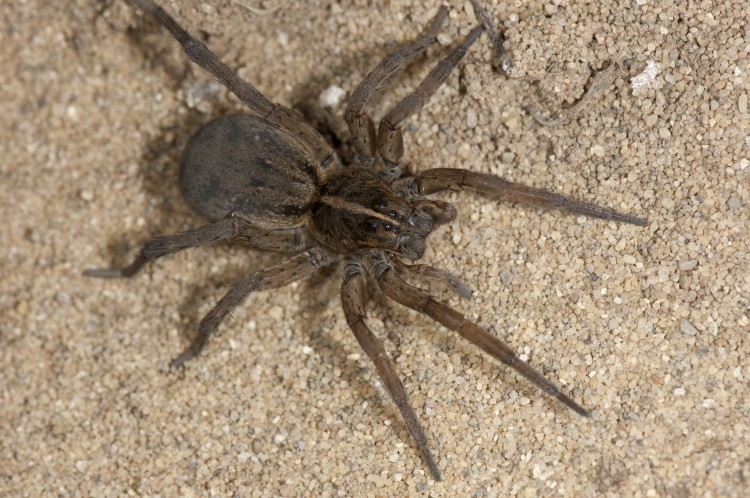 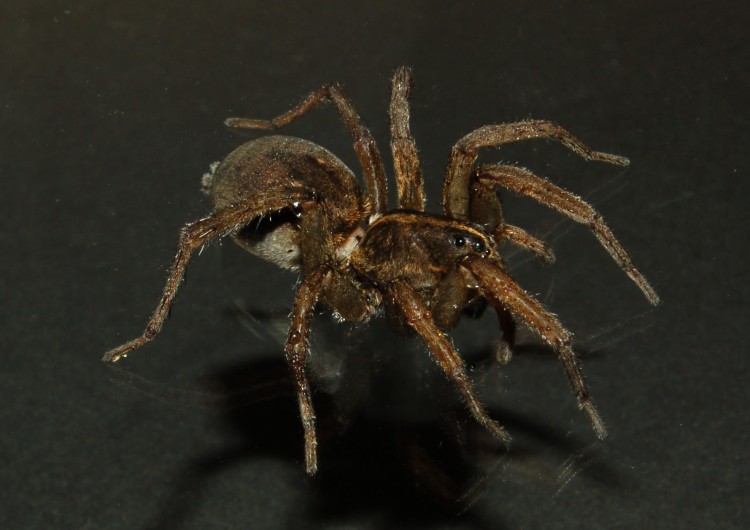 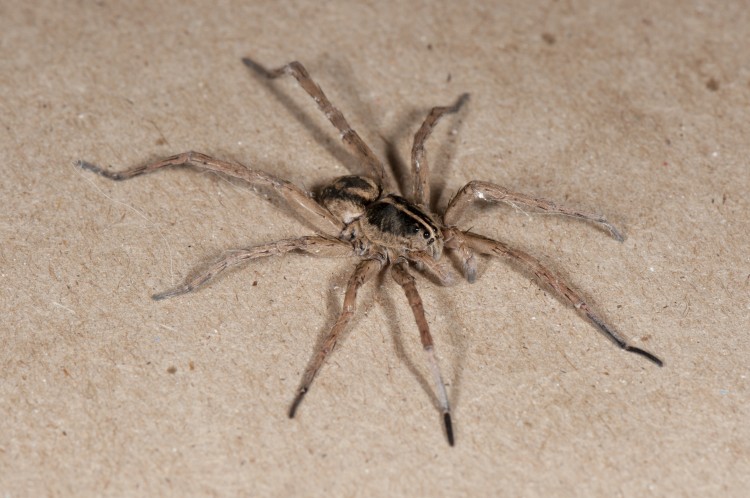 If you handle wolf spiders with bare hands (really? people do this?) you might be bitten.  As in the case of the nursery web spider bites described above; wolf spider bites can be briefly painful but usually aren’t serious.  A teacher friend of mine related the following story.  She noticed a group of boys in the corner of her class creating a commotion.  When she investigated, she discovered that they were tormenting a hapless Tigrosa helluo which had wandered into the building.  Being a friend of all things wild, she offered the spider an escape by placing her pencil (eraser end first) down in front of it, hoping it would crawl onto the pencil so that she could carry it outside.  To her surprise the spider quickly ran all of the way up the pencil and bit her on the thumb, ouch!  She then released the ungrateful spider outdoors.  Her thumb hurt for several days. Proof, once again, that no good deed goes unpunished. 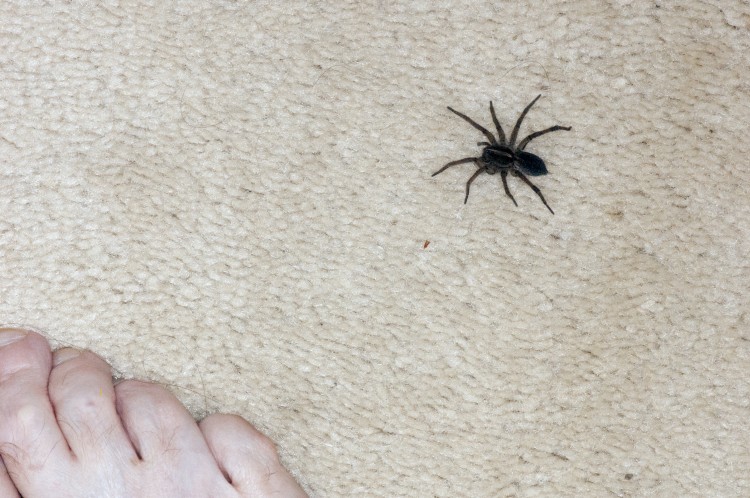