One of the great ironies of biology is that biologists spend a fair amount of their time killing the organisms that they study.  Don’t get me wrong,  I’m not saying that collecting doesn’t have it’s place, but we must recognize it for what it is.  Having said this, I should also note that most biologists avoid destructive collection whenever the objectives of their studies can be met in other ways; or if the populations of the organisms in question are vulnerable.

In the case of spider study, collecting is still relatively frequent.  There are two reasons for this. First, with the exception of a few large or distinctive species, most spiders cannot be identified without microscopic examination.  Serious study of an organism usually begins with identification. Second, because of their relatively small size and high reproductive capacity, most spiders have high populations in suitable habitat.  There are frequently hundreds to thousands of individuals per hectare.  For those species, removal of a few individuals is unlikely to adversely affect the health of the population.  Above all, think before you collect.  Is it really necessary to kill the specimens?  If so, are you prepared to take the basic data and label the specimens so that they are useful as permanent records?

The Ohio Division of Wildlife has no general permit requirements for collecting spiders in Ohio.  The Division requires that the collector obtain permission (preferably in writing) from the landowner before collecting.  When collecting on public land this would involve contacting the public agency responsible for the area.  This is particularly important if you may be collecting in ODNR natural areas, nature preserves, or Ohio State Parks.  Some of these areas are closed to collecting and others will require a specific permit.

The standard preservative is 70% ethyl alcohol (grain alcohol, ethanol).   This is not easy to obtain and is often expensive.  The best substitute is 70% isopropyl alcohol.  This is usually fairly easy to obtain at a local pharmacy or drug store, sold as “rubbing” alcohol.  It is usually sold pre-mixed to 70%.  Some spider collectors use 80% alcohol in the field because the water in the bodies of the spiders will dilute the solution somewhat, and because it kills the spiders a bit faster.  If you choose to do this, just transfer the spiders to 70% alcohol when you return home.  Do not use denatured alcohol as the denaturing agent may have unpredictable effects on the long-term stability of the specimens and may make them useless for DNA analysis.  Another fluid to avoid is “ethyl rubbing alcohol.”  This is denatured with other solvents such as xylene, toluene, or acetone that will damage the spider specimens.

The most critical portion of any sort of study is the collection of accurate data.  To ensure that the spider visual record or voucher specimen is to be of most value it is crucial that information about the record be made in written form.  The best way to do this is to write it down immediately.  Memory is imperfect and often incomplete. If you write down the particulars of where a spider was found, including the situation as well as location, there is a greater chance that you will provide accurate and complete data.  For spider specimens, this means putting a label directly into the vial with the spider.  Labels glued or tied to the outside of the container inevitably are lost or inadvertently exchanged with other labels.  Labels in the fluid with the spider are much safer.  Obviously the label must be relatively small to fit in a vial, but with care a clear label can be written on a small slip of durable paper or a piece cut from a note card.  Most professional biologists use permanent-ink pens for labels, these can be obtained from art or office supply stores as India ink or permanent ink pens.  One good choice are Pigma Pens. Alcohol will dissolve most inks, so you need to test the ink in alcohol.  Ball-point pen inks are almost always unsuitable.  The most inexpensive method is to write in pencil.  This is permanent in alcohol and will not fade with time.

Some workers print labels for commonly-visited localities.  This is an excellent method provided that the printing is permanent.  Sadly, most computer printer inks are water or alcohol soluble. Laser printed and photocopy labels will work in the short term but after ten years or so the lettering may fall off the paper.  There is nothing like the experience of picking up a vial with a valued specimen and noticing that the label has dissolved or that the lettering has separated and lies like black alphabet soup at the bottom of the vial!  I have found that Lexmark Black#17 ink for my inkjet printer is permanent in alcohol (for at least 11 years).

The label itself must include the exact locality and date that the spider was collected.  Additional information about the technique used and the particular situation can be written on the back of the label.  You may also wish to include a field number that refers to more extensive notes which you may record in a field notebook.  If you do this you should provide a copy of these field notes at the time of contribution of the specimen to a museum collection. 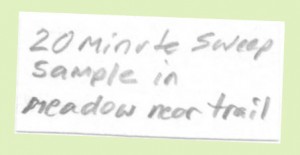 The easiest way to capture and collect spiders is to scare them into a dry container (such as the empty plastic container) and then transfer them into a container with alcohol. Alternately the plastic container can be placed in a freezer for a few minutes. In the freezer the spider will enter torpor and die relatively quickly and may experience less trauma. Carbon dioxide gas can also be used to anesthetize spiders before collecting.  The following are a few basic methods used when collecting spiders.

NOTE: Beating and Sweeping do not work well in wet conditions. If there is a heavy dew or if it has rained recently the net and the spiders will stick to the wet cloth and are often damaged or killed during the sweeping. They are much less likely to tumble into the net. Avoid sweeping in such conditions. 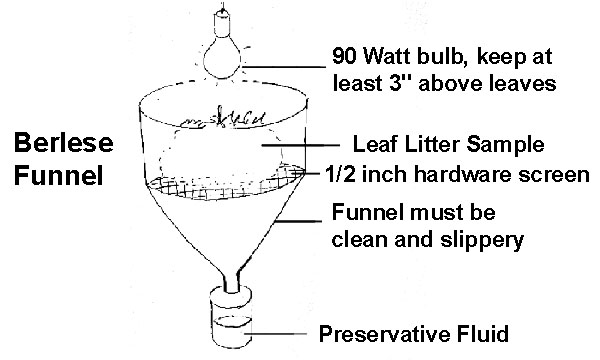