Bolas spiders are among the most remarkable spiders in the world.   These odd animals are in the family Araneidae, the orb weavers. But unlike the majority of species in this large family, they do not build an orb web. Instead, they hang in a very simple trapeze of silk just below a branch in a tree or shrub.  They prepare for their hunt by spinning one silk line with a droplet of glue at the tip. This is their bolas.   After preparing the bolas, they wait, hanging in mid air below the branch for a moth to come by, holding their bolas line in one of their front legs. When a moth approaches, they toss the bolas to snare the moth. 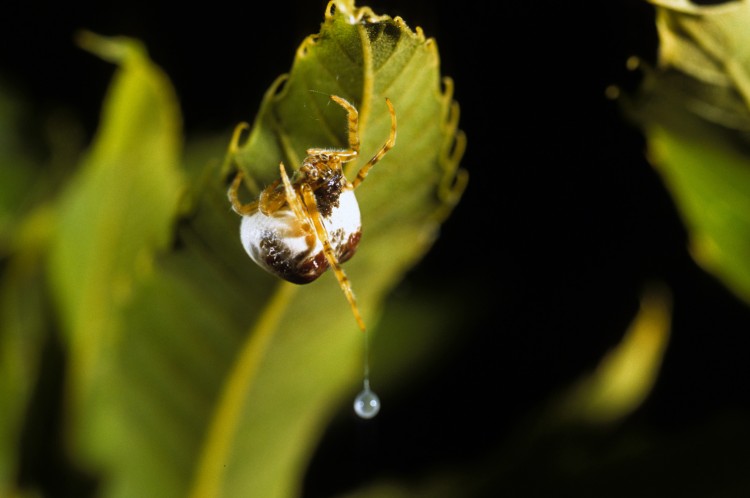 The name “bolas spiders” is a reference to the Argentinean gaucho’s bolas, a line with heavy balls at the end which are used in hunting guanacos (a South American relative of the camel) or rheas (a large flightless bird). If skillfully thrown the line with its balls wraps around the legs of the prey, hobbling them. There is evidence that this unusual hunting tool was invented by the Inca civilization prior to the arrival of the Spanish.

The bolas spider employs her line to catch flying moths. Mark Stowe and Tonia Hsieh have shown that the ball of glue actually has a long thin silk line coiled within.   When the spider tosses her bolas the line unwinds and wraps around the moth. This is a very strong line with adhesive glue, and if successfully deployed, it will hold a large moth desperately trying to fly away.

Watching a bolas spider hanging motionless below her branch, waiting for a moth to fly by close enough to snag, one could be excused for being skeptical that this could ever work. The key to the hunting technique was revealed when Bill Eberhard discovered in 1977 that these spiders catch only male moths. Why males? Because Dr. Eberhard determined that the spider produces a chemical perfume that mimics the sex pheromone of a female moth. The males home in on the odor and fly directly up to the waiting spider. Even after she tosses and misses, the sex-starved male moths continue to approach, presumably still searching for the elusive female moth who isn’t there.

During the day bolas spiders glue themselves to a leaf. Here they sit, with their legs curled up around them. They are fat globular-shaped spiders with subdued colors. Some are brown and white, others with a slight greenish tone. The globular pose and colors make them resemble bird droppings. When disturbed while resting they employ a “stink” defense, the emit an unpleasant odor. This is thought to deter predators. 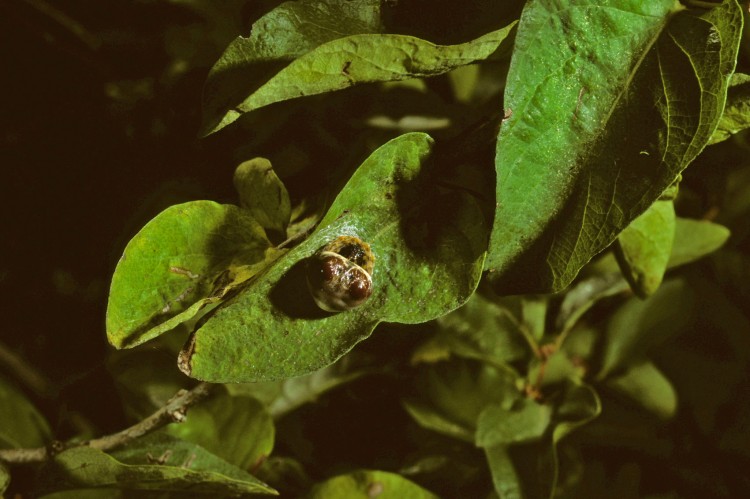 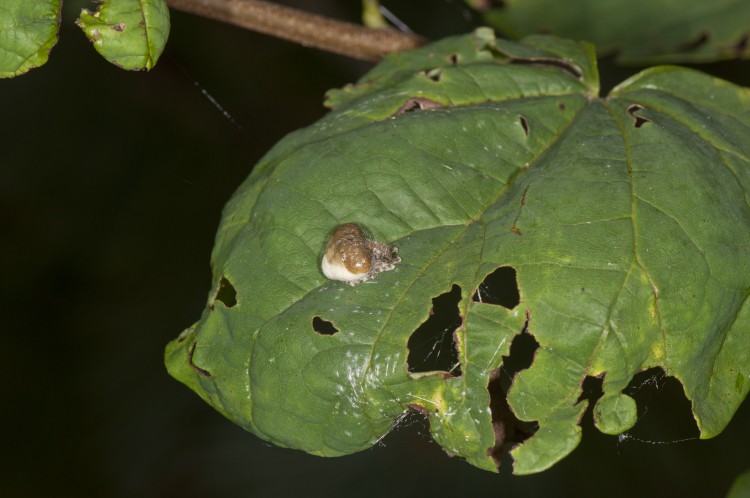 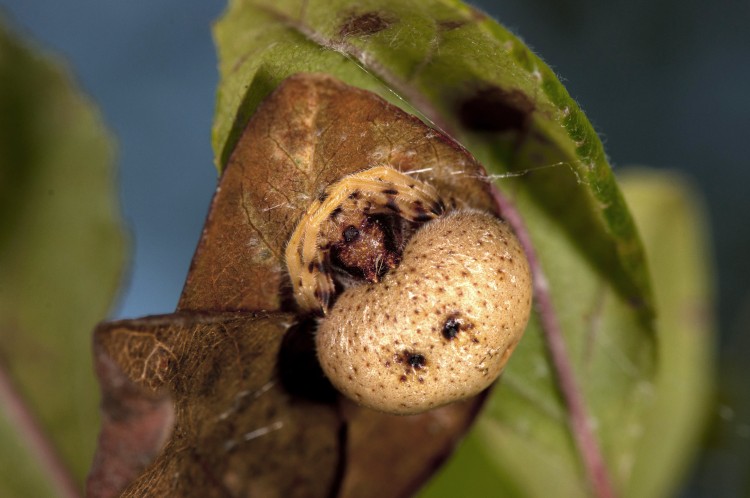 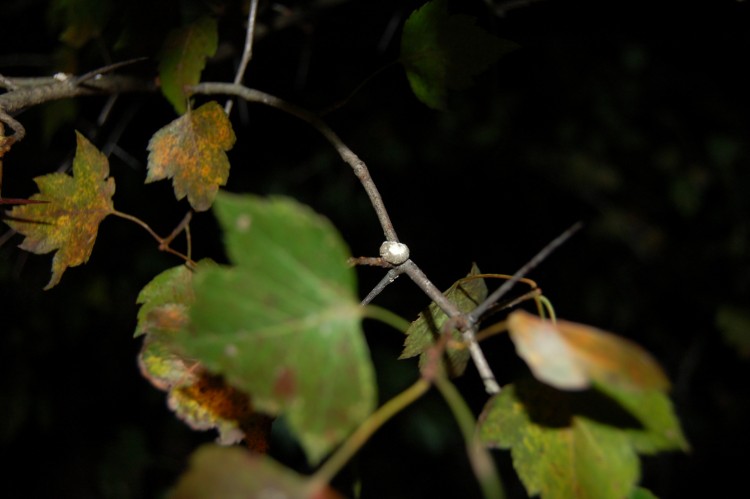 an actual bird dropping, looking a bit like a resting bolas spider

We have been very lucky to have found bolas spiders in our rural Ohio yard. Back in 2001 we found females of the cornfield bolas spider, Mastophora hutchinsoni. Since that time we have found this species hunting in our yard on a number of different years. 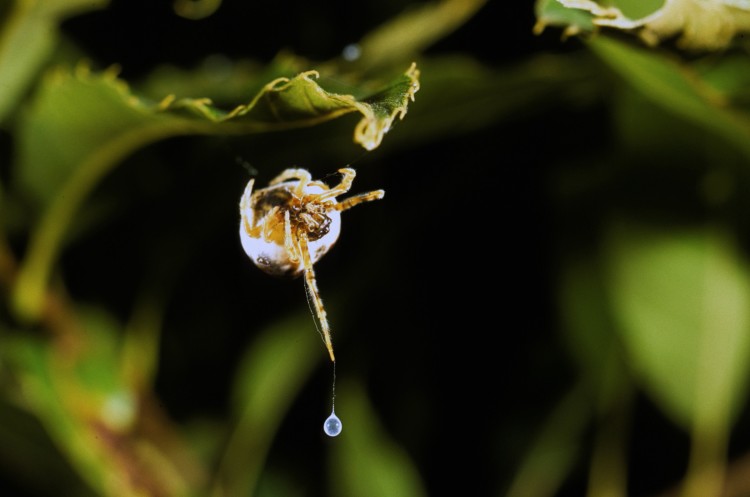 This August I went out hunting with my headlamp for spiders. I was really hoping to find a bolas spider, because we had not seen one the past few years. I was rewarded with a beautiful adult female hanging from a low branch of a crab apple tree. As I approached, I realized that she didn’t look like the familiar M. hutchinsoni, it was actually a different species of bolas spider! After consulting Herbert Levi’s monograph on this genus, I identified her as an adult female of Mastophora timuqua. This was a very surprising find, the species had been previously known only from Florida and North Carolina, a very long way from Ohio. 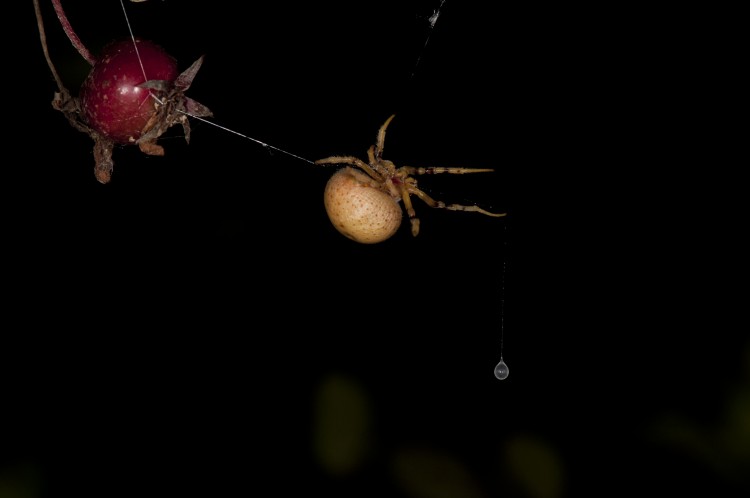 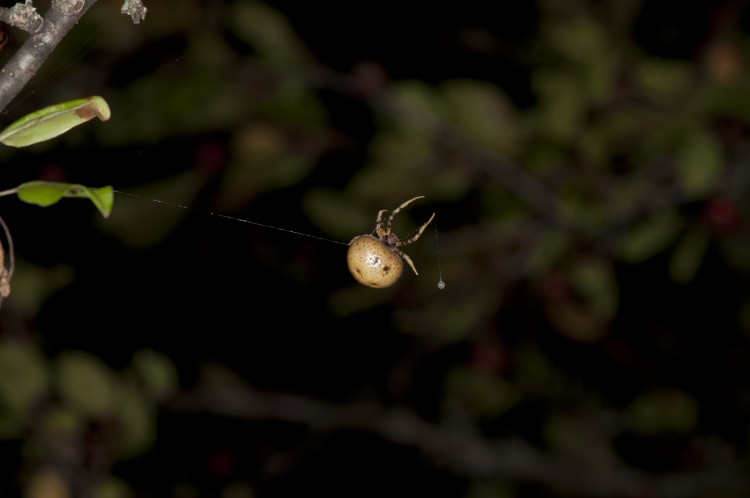 As the summer progressed into autumn I was able to observe the spider hunting on many occasions. Several times I saw moths approach, and observed the spider fling her bolas. Most of these attempts were failures, but once while I was watching she managed to snag a moth. The moth flew in a circle, round and round, held by the silk line until it reached part of the branch and landed. He pulled himself free from the line and escaped.

On one evening I was able to take a photo of the bolas spider before she had completely wrapped her prey. It turned out that this photo was sufficient for John Gilligan to provide me with an identification of the moth (Greater Black-lettered Dart, Xestia dolosa). 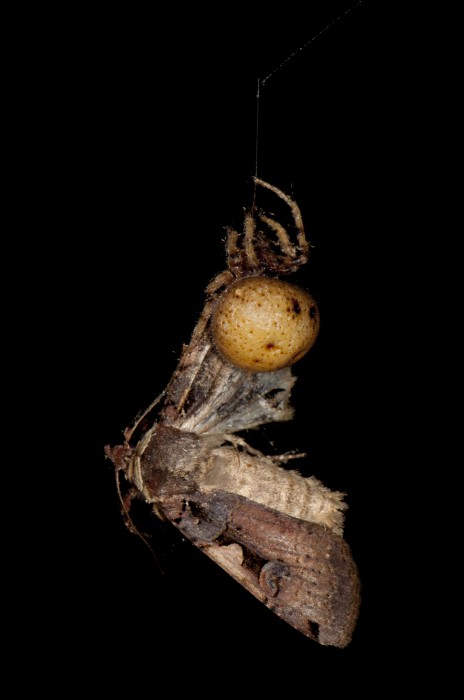 Experimental work has shown that bolas spiders can vary the odor lure that they use to capture moths. They evidently choose from an arsenal of chemical attractants the one that is appropriate for the particular moth species flying that night.

I even tried to shoot video of the hunting bolas spider. My efforts were rewarded with a few short video segments of her hunting. The first video shows her spinning her bolas, pulling out silk and glue to fashion her bolas.  This part takes quite a while, if you stick with it she eventually re-positions herself, holding the completed bolas below. Near the end of this segment she tosses it at a moth, but misses.

Finally after many fruitless evening video shoots, I secured a segment with a successful capture and wrap. This is a five minute video, so you will have to hang in there to see the whole show. At first she misses, but then… success! Beware this is a very violent capture. It is a real testament to the strength of the silk snare. Eventually you will see her approach the wildly spinning moth, deliver a bite, and back off.  Soon you can see the venom take its effect and the moth stops struggling. Finally she returns to wrap her prize.

For the next few weeks she would fatten up on moths each night. Sometimes I was able to find the empty husk of a moth, wrapped mummy-like in a silken shroud, below the spider on the ground. 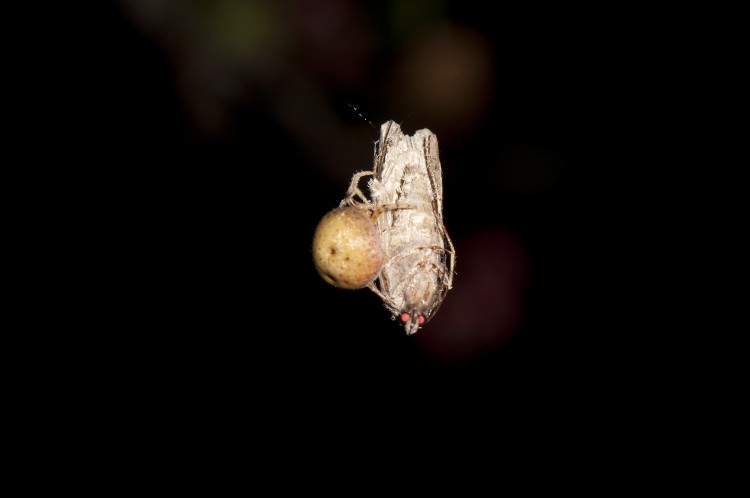 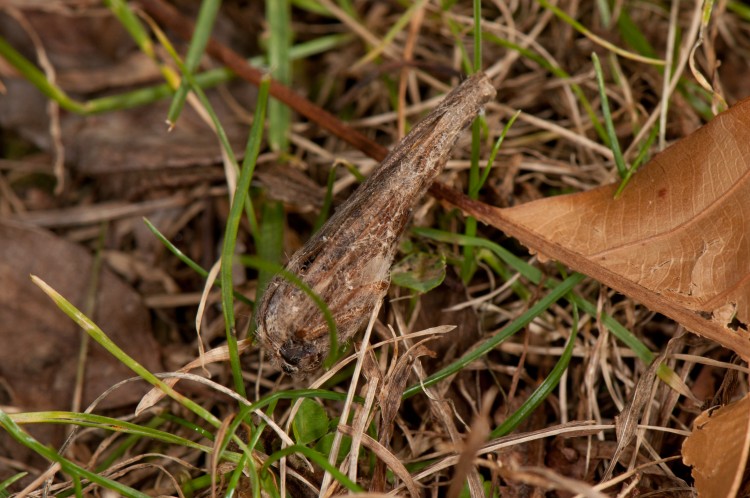 “mummy” of a moth, having been wrapped and discarded by bolas spider

On a few nights I saw the bolas spider hanging with her legs spread, but without a bolas. Perhaps she was still emitting her pheromone lure because on at least two occasions I saw moths approach her in this pose. I never saw her capture a moth without a bolas, so I don’t know for sure if this is what she was doing. 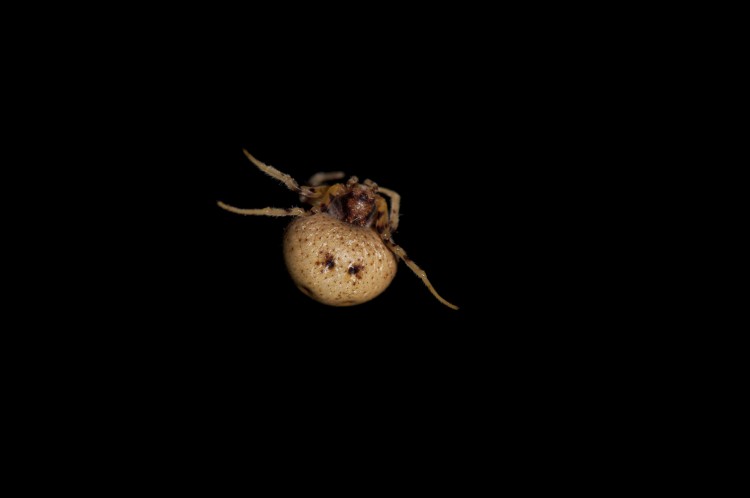 The bolas spider stayed on the same branch for weeks. Even after very heavy rain and wind, she remained. On the early morning of the 9th of September, Amy noticed that she was building an egg case. She carefully attached it to the branch, walking around the case and branch laying down many layers of silk to form a sort of strap. 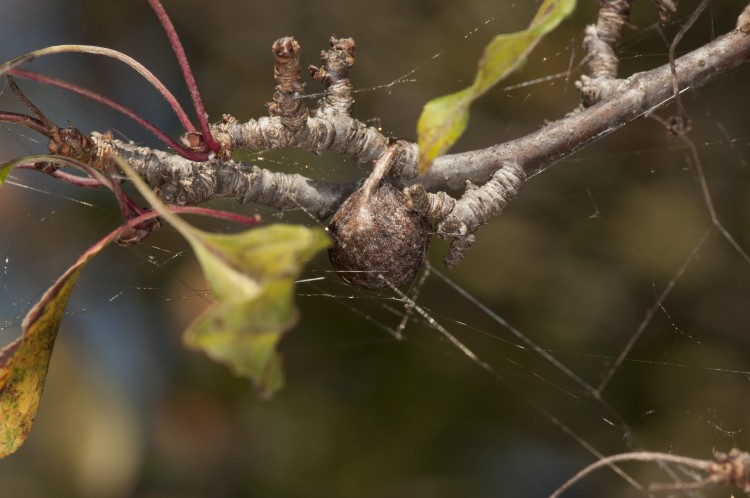 After laying eggs and constructing the silken case, the spider appeared shrunken. The next night she was hunting again.  After a couple of weeks of meals she was back to her plump self.  After her third egg case, she was visibly wrinkled. 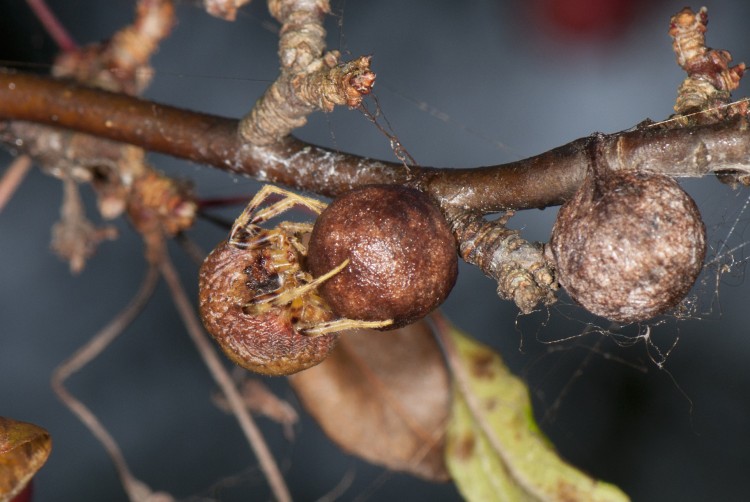 After laying this third egg case, the spider appeared very gaunt. She hung from the end of her branch, listless. This is the end of her annual cycle, and like most orb-weaving spiders, she would not survive the hard frosts to come. She was remarkably successful to grow to adulthood and produce three egg cases. We can only hope that these will yield a little army of bolas spiderlings next spring.

Bolas spiders have lots of other interesting tricks. For example, sometimes they use a passive bolas technique, spinning a horizontal line and hanging several bolas’ below it. 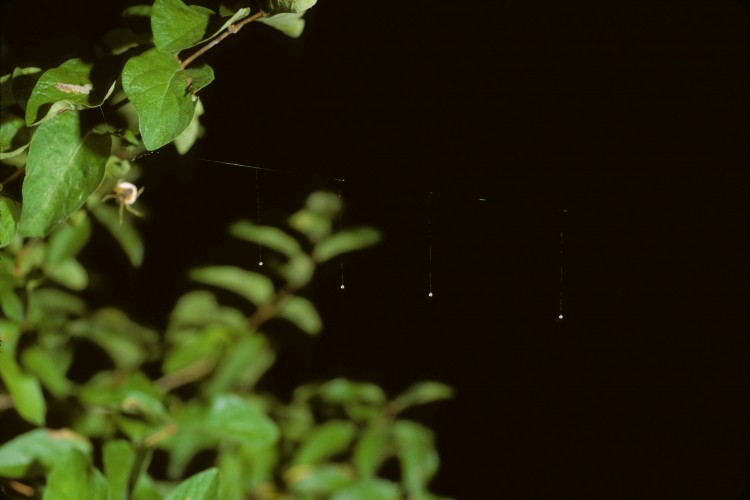 As if all of this wasn’t peculiar enough, adult male bolas spiders are dwarfs. They are very tiny compared to the female. The males mature very early, some even mature while in the egg case and emerge as adults. In other species they molt to maturity very soon after leaving the egg case. As a result they are tiny, like most young spiderlings. In contrast, the females must grow and molt many times to achieve adult size. In the illustration below a female of Mastophora cornigera is shown with a male to the same scale. This illustration is by Steve Buchanan. 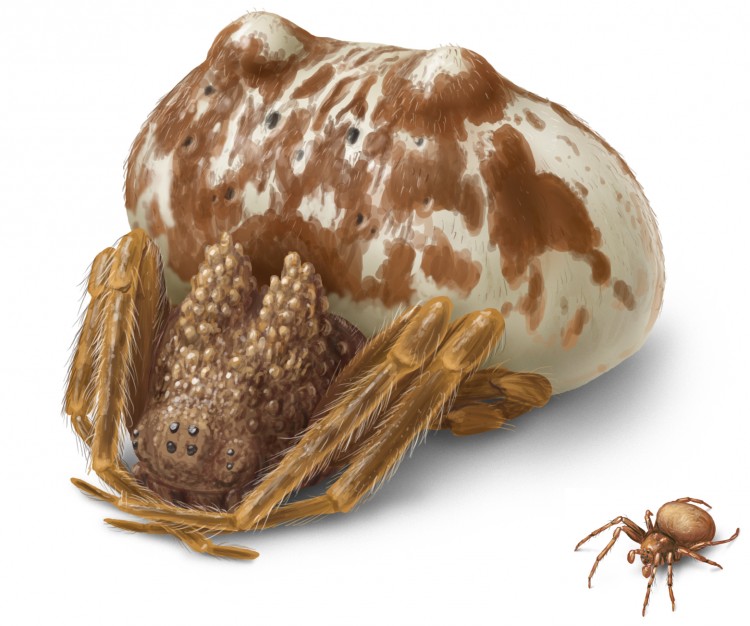 Recently I was perusing images of bolas spiders (Mastophora) on one of my favorite web sites (bugguide.net).  I found a series of remarkable images of a female Mastophora phrynosoma accompanied by an entourage of little males.  The photos were posted by one of the many volunteer contributors to the bugguide site, Matt Coors.  Matt found the spider in August of 2014 near Cincinnati, Ohio.  Matt is an artist and you can see some more of his photos and samples of his art here.

These photos of adult males with a female of any species of Mastophora are quite rare. 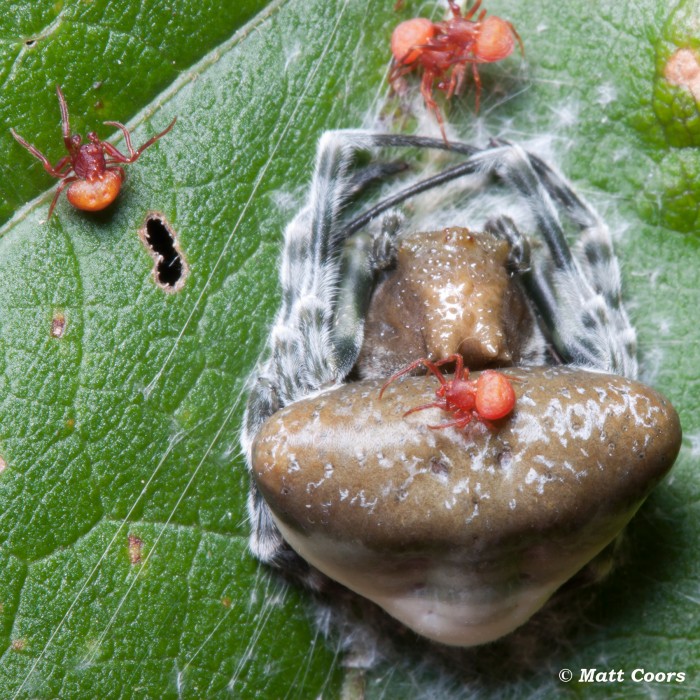 Mastophora phrynosoma with an entourage of little males, photo courtesy of Matt Coors 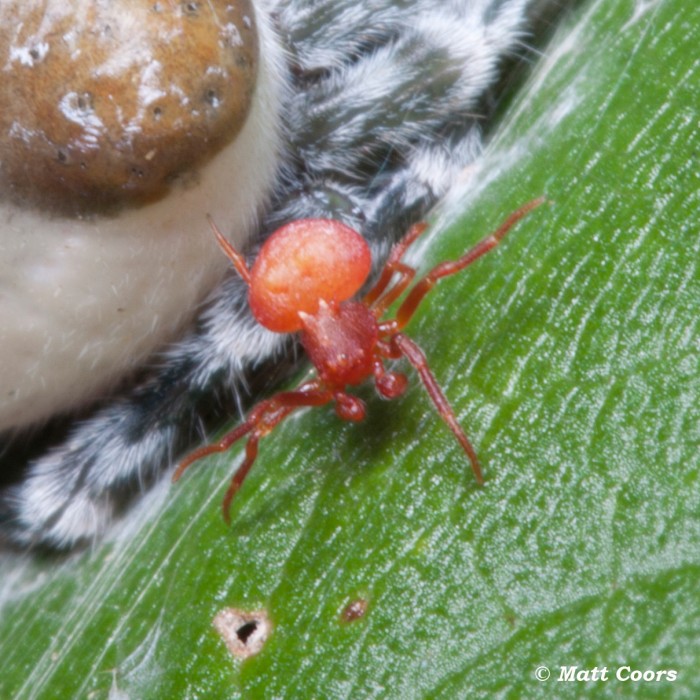 There are a total of 50 species in the genus Mastophora, currently known only from the new world.  Other spiders, classified in different genera, with similar pheromone mimicry hunting behavior are found around the world. Of the members of Mastophora, only 15 species have been found in North America north of Mexico, and only 5 are known for Ohio.

For more information about bolas spiders and Steve’s illustrations of a few other species and their distinctive egg cases, you can consult Common Spiders of North America, plate 7 and pp. 94-96.