In early June I had a surprise in our yard.  For the first time I found a Hypsosinga rubens in her web.  This is a relatively small and rarely-encountered species.  The range of the species includes most of the eastern half of North America north of Mexico as well as the prairie provinces of Canada, but few individuals are ever noticed.  Almost all the records for the species are obtained in general sweep net samples of fields and field-edges.  In his review of this and related genera, Herbert Levi also mentions that some have been obtained from leaf litter samples (Levi, 1971).  Nicholas Marcellus Hentz in his iconic monograph “Spiders of the United States” writes in 1875 that “This species is not rare, both sexes having been found on perpendicular webs.”  During the Ohio Spider Survey (1994-2014) only four males, five females, and two immatures were collected.

The most remarkable thing about the adult female Hypsosinga rubens that I found on June 6th was that she was in an orb web oriented horizontally.  This is very unusual for members of the family Araneidae (orbweavers).  Horizontal webs are typical of a different family, the long-jawed orbweavers (Tetragnathidae).  In addition to the typical horizontal webs, some members of that family build their webs at an oblique angle, like those of the common orchard orbweaver (Leucauge venusta). Orchard orbweavers are common and familiar, as well as spectacular because of their bright green and iridescent silver coloration.  Finding a “typical” orbweaver in a horizontal web was a shock to me.  And remember that Hentz states that this species builds a “perpendicular” web.  This was my first observation of an undisturbed individual resting in her web. 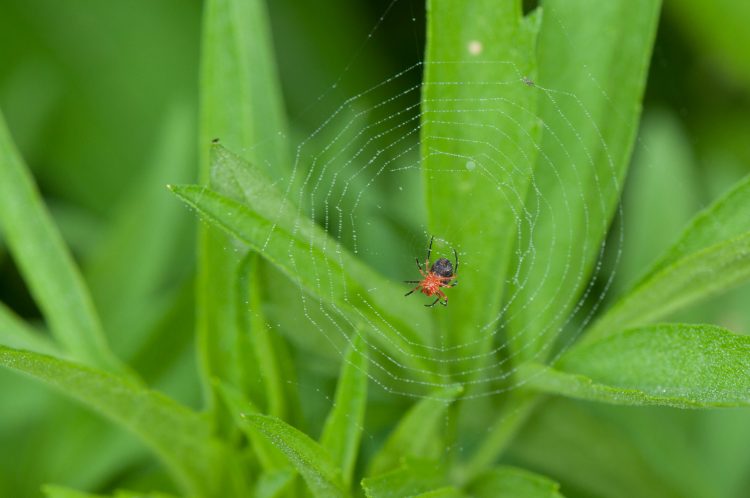 Hypsosinga rubens female in a horizontal web, viewed from above 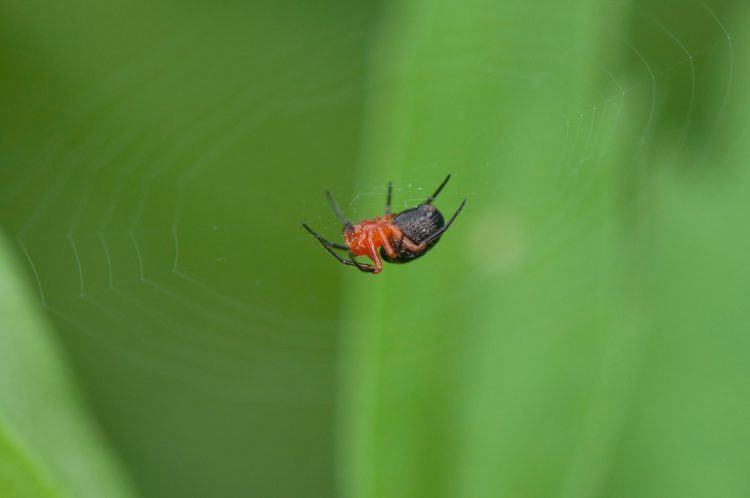 As you can see from these photos, this is no plain Jane spider! She is bright red-orange and black.  Even at her diminutive size (body length about 3/16 inches) the dramatic coloration is striking.  Her web was stretched across the upper leaf tips of a gray-headed coneflower (Ratibida pinnata).

I admit to being surprised by how brightly colored some of Ohio’s day-active spiders are!  Surely they would be conspicuous to any predator armed with color vision.  How they avoid becoming prey is a mystery to me.  Here is another photo of her hanging below her web. 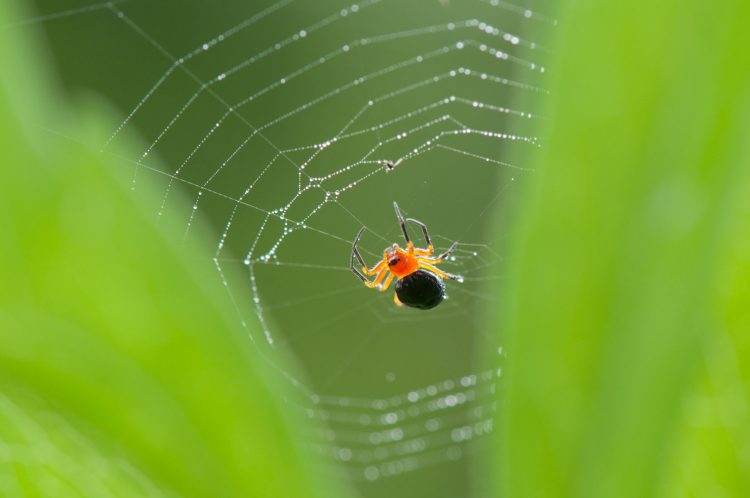 Hypsosinga rubens female in her web from below

Because there are several species in the genus Hypsosinga, and each is quite variable in color, I captured this individual and examined her under a microscope.  She was an adult female.  Here she is in captivity after being anesthetized with CO2. 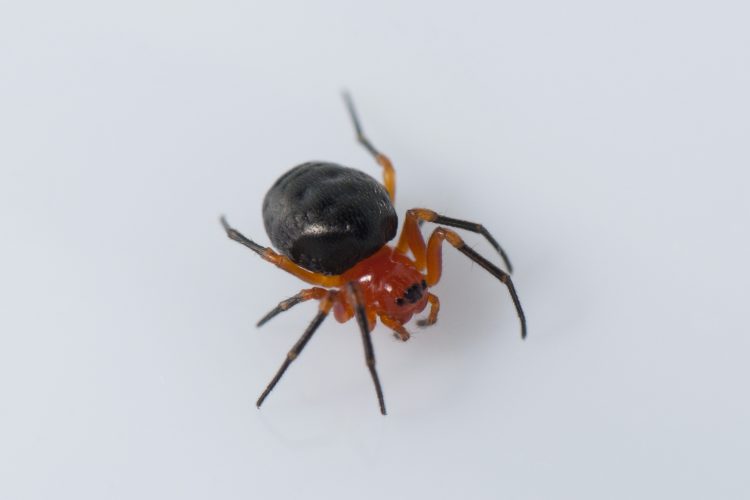 So you could be excused for wondering, why is Rich writing a blog post about one spider in his yard?  The reason is that six days later I found a second individual of the same beautiful species.  She was in a proper vertical orb web, suspended among the foliate of an orchid plant on my back deck.  And she was a completely different color form! 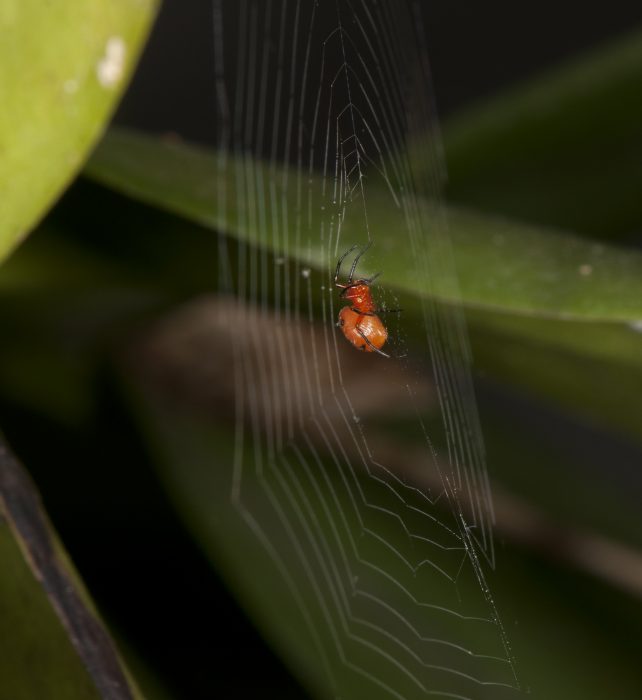 Here is what she looked like in captivity, you can see that this “light form” has very different coloration. Under the scope her reproductive anatomy was identical to the dark form individual I’d seen a week earlier. 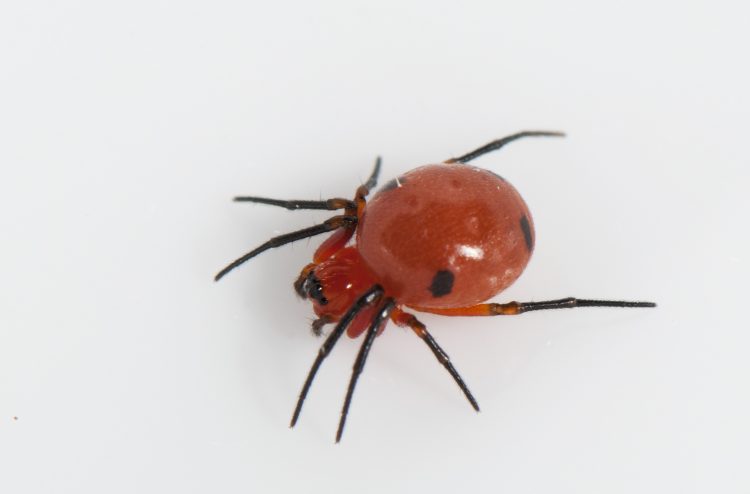 Having found my second ever observation of this spider in a natural undisturbed pose would be enough to be exciting.  But if you look at the original photo of her in her web you might notice something else unusual, she is oriented with her head (cephalothorax) uppermost!  Almost all orb-weaving spiders hang head down.  The only other orbweaver species in our area that I’m aware of that habitually hangs in the web head-up is the triangulate orbweaver (Verrucosa arenata).

Triangulate orbweavers are also polymorphic and often very brightly colored.  They too have often been found out in the middle of their webs during the day.  Are these brightly colored, day-active spiders distasteful?  Are they advertising their bad taste with aposematic coloration?  As far as I know there is no evidence one way or the other regarding this possibility.  Here is a photo of a triangulate orbweaver in her web. 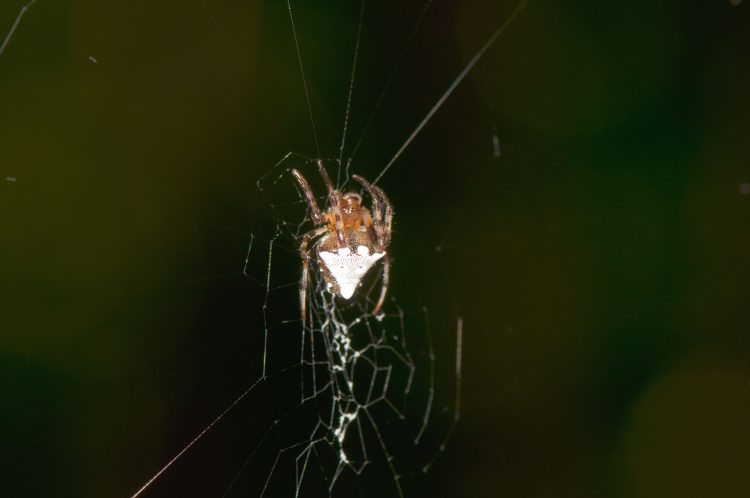 triangulate orbweaver (Verrucosa arenata) hanging in her web, head up.

Not all triangulate orbweavers are as “plain” as this individual. Check out this remarkable color form in a photo taken by Chris Friesen in his yard near Delaware Ohio back in October of 2016. 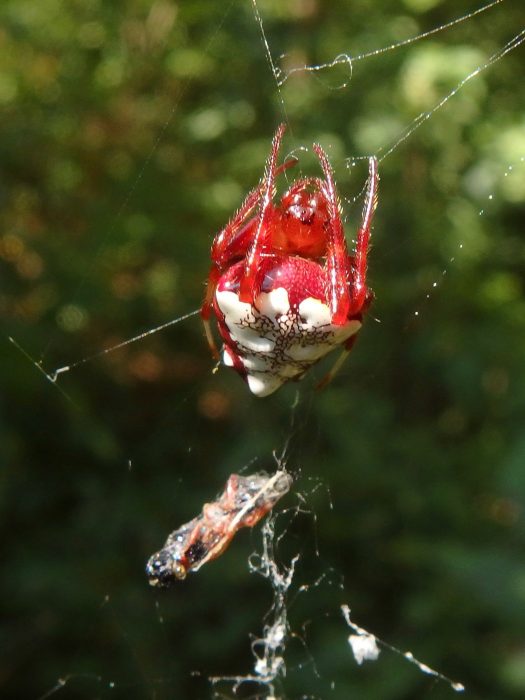 If you can avert your gaze from that spectacular spider, notice that she has captured and wrapped a wasp prey item.  So she is no slacker at dealing with formidable predatory arthropods!

One other feature of the understudied biology of Hypsosinga rubens is highlighted by Herbert Levi in his review. He speculates that spiders in this genus “make a complete orb probably with a retreat.”  Neither of the females in my yard had any sort of retreat associated or near the web.  The 12 June female used the “drop and hide” method of reacting to my close approach. It tested my patience to wait until she climbed back up her “safety line” to her web after she dropped. This behavior is typical of orbweavers that do not build a retreat.

As far as I’m aware these are the first descriptions of the webs of Hypsosinga rubens since Hentz’s “perpendicular” comment in 1875. The posture (head up) is very unusual. These casual observations highlight how much we don’t know about our spiders. This species represents the 190th found in our yard, a small (1.3 acre) lot in a primarily agricultural landscape. The remarkable spider diversity here is partly the result of our extensive native plantings, but I’m guessing it is also a reflection of having residents (Amy and I) that are keenly interested in the biota here, and paying attention for the past 28 years.